On the Nature of Venusian Glamour

Unlike talismans for wealth or worldly advancement, pentacles for love, lust and relationship success follow more of a winding road to the shimmering end goal of victory. Often people misunderstand one form of glamour for another and make the error of assuming they will color one’s life in the same way. Unfortunately, this is far from the truth.

The nature of Venusian glamour to obscure one’s flaws, enhance one’s attributes and generally ingratiate oneself into the flow of social dynamics is rather more nuanced than the burning aspect one might find from a Solar equivalent. More a lilting melody or a hint of a hauntingly good memory than a trumpet blare or a bit of regal fanfare, Venusian glamour has to its credit a far more subtle power. So, that being said, it behooves the discerning individuals who purchase from Practical Occult to pay some mind to the following helpful explanation of how to get the best mileage out of the Venus Pentacles up for purchase in the pursuit of love or even just a good time.

It can be helpful to think of wearing a Venus pentacle as a Dungeons and Dragons stat boost to one’s Charisma score. This is both helpful and crucial to understand especially vis-a-vis the modern social landscapes and, what’s more, in view of the years of social distancing. A +3 Charisma modifier may have done wonders walking about a small town in the 1960s where your only shimmering competition was found on the glossy covers of magazines or in 1860 where your sights were set on the most attractive peasant girl in the village who, if you were lucky, had all of her teeth remaining. Be still my heart! However, in today’s era of Instagram, dating apps and social media this enhancement to one’s aspect may still be swept away in the sea of filters, photoshop, inflated dating profiles and the culture of FOMO in which all of us sway back and forth.

Far from a pessimistic message, this is a suggestion to adapt one’s tactics in employing the magical tools one has. The frustration of purchasing a literal handful of magic and coming up short would be deeply overwhelming and Practical Occult is here to help our favorite discerning individuals dodge this bullet with the grace and finesse suitable to a Venusian glamour. Now, assuming one has done one’s best to do simple and basic things like taking a shower and actually putting oneself out there, the following tips may be what is needed to begin to find the sort of success that spurred the purchase of these pentacles to begin with.

This article being written in 2021, it is assumed that most romantic endeavors are conducted online and will be until people are permitted to congregate en masse again. During those times, when all of this is behind us, any person-to-person enchantment and glamour will hit far harder and more effectively and these tips may not even be as necessary. Until then, one could do far worse than put these ideas into practice.

A common-sense application of these pentacles that goes a bit unnoticed by some is to actually be wearing them in one’s dating profiles. Many of these copper discs found magical life under the emerald light of Venus only to be locked away in a box on someone’s desk. They function far better with eye contact. If you want people to swipe right, the goods, in more ways than one, must be on full display.

Another suggestion is to write up a list of the qualities desired in a partner and let it rest underneath the pentacle while you sleep, allowing the spirits of Venus to go forth and do some searching for you. Remember, far from being inert bits of metal, these are vibrant and powerful portals to planetary energies and intelligences that work wonders for people. Giving them something to work with is always better than silently hoping they can read your mind and your heart when perhaps it’s fair to say that you haven’t been giving yourself permission to have preferences at all in the dating game.

Make efforts to avoid actively hampering your own success. Beyond the tried-and-true wisdom of “be attractive and don’t be unattractive,” it’s also helpful to understand that certain behaviors and life-choices make it harder for the magic to work by actively limiting its avenues to bring you success.

If a dime was dropped in a bottle for each person who got their hands on a Venus pentacle only to give up after their first day on Tinder with no matches, the price of one of these fine items would be met and likely exceeded. Persistence in this and all things is the key. Remember, a stat modifier turns the odds in your favor, sometimes profoundly, but they aren’t going to make someone who has nothing in common with you suddenly wish to drop everything and chase you down.

Not wearing the pentacle when you’re out doing mundane activities like grocery shopping or waiting in lines six feet apart at the post office will hardly give you the edge you need to stand out to the attractive so-and-so in the room whose mask you’ve been admiring for the past ten minutes. Keeping it close to you when texting the object of your affections is a good way to allow that magical charm to seep into your words and make you far more charming than you otherwise would be. Remember, Charisma scores are more than just a pretty face!

Allowing the magic to act through you in your life is something often resisted by people new to these pentacles. Anything from sudden inspiration of just the right thing to say to someone to randomly catching the eye of a stranger who is particularly resonant with it all fall under the umbrella of the subtle and intricate glamours of Venus and may take a bit of time to begin to perceive easily. Rest assured, however, this time will be worth the wait. Pay attention to what these spirits show you and you will be rewarded.

To further explain this point, consider the following scenario. You are on social media, pentacle worn in the photograph, and you’ve managed to match with someone cute. You’re speaking with them now but you’d be considered a bit naive if you assumed you were the only one vying for their attention. The pentacle got you in the door and now you’ve got to actually talk the talk if you want, eventually, to walk the walk. Consider in the forest of messages, yours somehow stood out. Is that not in itself a remarkable result? Take that result and grow it into what you desire with the help of this magic and with your own charm and cunning.

Eventually, assuming you do get that date and you’re actually in that person’s presence, that will be where the magic really shines. Compared to everything that was required up to this point, letting those rays of Anael wash over your crush one-on-one will be, maybe quite literally, a walk in the park. 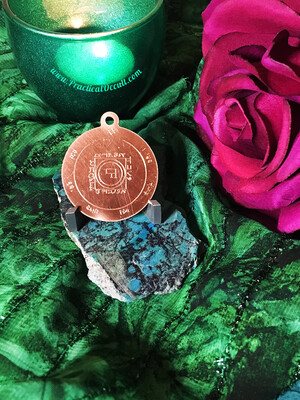 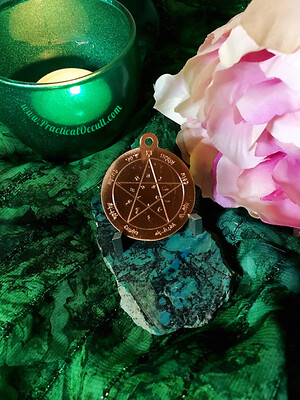 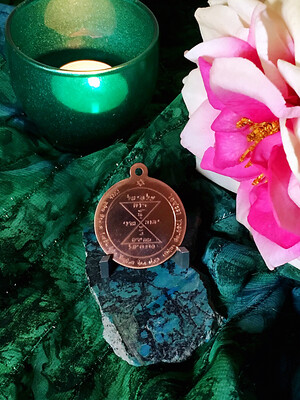 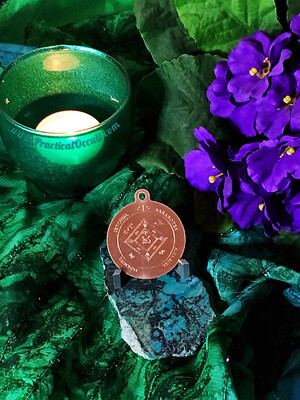 My name is Alexander Moore and I am a practicing esotericist with over two decades of active experience in several occult systems including Solomonic Magic, Conjure and other folk practices and Traditional Witchcraft. I am proud to provide coaching, mentorship and divination for occultists who are interested in taking their magic and their lives to the next level in a changing world.